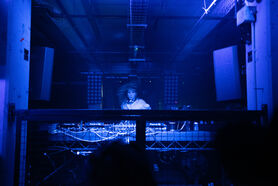 Working in a high-end recording studio and getting my hands on a 909 for the first time was definitely a powerful moment for me but I don’t think there was just the one force. It was like a funnel streaming everything else my life has been about up to that point – from seating on the sofa every day watching my mum teach piano as a toddler, to learning how to play piano myself, to falling in love with dance music and collecting it obsessively, to moving to London, working at Black Market records and everything that followed after that.

Production or DJ? Sun or sea? Chocolate or wine? Why Choose? Hybrid is the way forward, if you can afford it. I was lucky enough to work in a fancy studio with a 64-channel Neve desk and had access to one of the largest synth collections in the world for a few years - it was wildly magical and so much fun, but it was also very distractive. These days I'm mostly in the box with the odd 909 and SH-101 thrown in, and while I'd love to expand my home studio, I do get ideas down quicker this way - and isn't music mostly about ideas - as is all art? I mean, you can’t make a bad idea better just by getting the latest plugin, and it's also not about the number of synths you’ve packed your shelves with. When it comes to DJing, working at Black Market Records has set me up as a vinyl lover for life; I still go digging, but most of the music I play these days is only released digitally, so again - I'm right-handed but I wouldn't let go of my left hand. Sorry, this is a really weird analogy!

Printworks in London is definitely one of my favourites when it comes to bigger venues, it is so striking and unique. I had the privilege of playing there a couple of weeks ago for Elrow - the combination of Elrow’s hedonistic art direction and Printworks’ monstrous structure was WOW. On the smaller scale, Jaeger in Oslo is exceptional – they have a double-headed mixer which flicks between an Alpha Recording System rotary and an Allen & Heath on demand, a thoughtfully tuned Funktion One system and a fresh, deep smell of oak – it makes an incredible space for music and dancing.

At the end of the day it’s down to everything aligning – the crowd, the venue, the atmosphere, even the weather, and yes, the DJ and the set they’re playing, but it’s never about the DJ set on its own

It’s a close call between time travel and flying… I’m going for time travel and back into the late Jurassic era. I was a dino geek as a child, I had this recurring dream of riding a Brachiosaurus in the tiny streets of my hometown, so it would be nice to give that a go.

Q: 1 person you'd dream to have a coffee with?

Dead that you don’t know: my beautiful grandmother.Alive that you may know and if you don’t then you really need to get on it quick: Louis CK. He’s so fucking funny.

‘The Neverending Story’ – I love this film and I adore the many clever messages it carries out. I would redo the theme song as a jackin’ techno cut – keep the original song’s uplifting vibe but fierce it upppp!

Q:Tell us a fun fact about yourself that most of your listeners don’t know

I recently recorded my kickboxing gym manager, who’s never sung a line in her life, for one of my tracks. It was a silly and crazy idea that worked out really well - I love how random life can be.

2022 has been really good to me, I’ve travelled the world playing brilliant clubs and festivals and there were some serious pinch myself moments, like when I was closing Koko in London after Floorplan. Next up is another milestone - Elrow at the Warehouse Project in Manchester on 17th December. I’ve also been having a lot of fun in the studio this year and made some music I’m really proud of that’s due for release next year, including some unusual and surprising collabs. Oh and I’ve been on the edit tip quite a bit recently too, making personal versions of ‘classic bangers’ as I call them, one of them is of Laurent Garnier's 'Crispy Bacon'.