This moment when you are in a venue surrounded by just sound and experiencing the crowd slowly getting in sync to that one groove never loses its magic. Finding out that it’s not just the composition but the momentum between the performer and the listeners that creates this tension, I never stopped elaborating on those dynamics, craving for the perfect amalgamation between my music and the dancers.

To me, that is a totally overrated topic. In the end, it is about people coming together and having a good time, becoming one with the music. If that music is pressed on vinyl and carried all over the world or copied on a USB stick does not really matter to me at all. There are amazing sounding digital tunes and awful vinyl pressings (and the other way around). So for me, it is a discussion I do not really participate in. There are a few arguments I can throw in here though: These days, many clubs and stages don’t really entertain their vinyl setup properly anymore. So bringing vinyl only can be a risk. Plus: A lot of great Afro House music is not even available on vinyl. That means: I am clearly on the digital side. But I am not passionate about it. If you love vinyl: Go ahead! I’ve been there, it’s hard work.

It’s definitely Watergate, where I hold my residency together with the RISE team. There is this passionate focus coming from the crowd, not expecting to be entertained, but entirely curious about where you will take them musically. Not rejecting experiments and always staying open to something new and unexpected. Having such a crowd following you for a whole night, patiently rolling with what you offer, is a sheer blessing. Watergate has been extremely supportive over the years and fully stands behind the idea of RISE and its inclusive spirit. (Thanks to them, we were able to build a safe space for many that is hard to find in the club world.) We can’t appreciate that enough.

The perfect mixture between teasing and pleasing, between provoking and soothing. Between energizing and keeping a certain suspense. It is all about reading and feeling a crowd, becoming one with the people on the dance floor, giving them what's right for the moment, but also taking risks and taking them places they would not have thought of going before. All of that presented in a flow that is building tension and releasing it. Being versatile but not all over the place. In the end it is like so much in life: It’s about finding balance. Lazarusman, Pablo Fierro and I even wrote a song about that on my upcoming album. It is called “The Balance”. ;)

I do actually have some superpowers on stage by transforming into the masked artist Hyenah, so I regularly become invisible and turn into someone else. It gives me that  certain strength that I would not have without it. It lets me do things with this project that might take unexpected turns, and I do love that.  Does that count as a superpower? I have to sacrifice my ego, so I can relate to the tragedy of superheros that become invisible.
Q: 1 person you'd dream to have a coffee with?

I would love to just sit and listen while Fela Kuti and Nelson Mandela enjoy a cup of Espresso, each of them telling the other his favorite joke.

Imagine the soundtrack of A Space Odyssey just being interpreted by drums. That would be such a challenge, and I am sure it would work just great.

Nice try! I am sorry but I don’t reveal my home or origin. The Hyenah is home where it is welcome. There are great songs everywhere in the world though. It is such a culturally rich place - all over the world! And music is such a powerful thing. I do like the trend of badass chicks in pop music these days. Young and confident women that found their own cultural identity and integrate that in their art. It is different, fresh and inspiring. A few examples are Marina Satti from Greece, Noga Erez from Israel, Sampa The Great from Zambia or Lous & the Yakuza from Belgium / Congo.

My focus will remain on my album “Love In Times Of Crisis” (...which will be out on RISE MUSIC) and its musical content for a bit. Touring and showcasing will most likely determine my upcoming months. And since the main idea of the album is the magic of collaborating and being close to each other, I wanted to take this narrative even further by having a few remixes coming out later this year. Besides that, there is another project that is close to my heart:  I just spent some time in rural Senegal, recording with the Bedik community close to the border to Mali. Due to an increasingly eroded environment, their members are on the verge of being extinct. So we, the RISE members and the Electrafrique crew from Dakar, felt that it’s time to musically preserve their language called Menik and have it represented in a contemporary context. There soon will be an EP coming out on RISE focusing on that tribe’s struggle and their team spirit. It will showcase the vocalist Beni Fadi and a few of his colleagues jamming away in their Menik language with us RISE members.

I am just the medium. The magic is happening between us. Without the crowd, I’d be worthless. Female Hyenah’s possess similar looking reproductive organs to males, therefore accurate sexing can be difficult.

Three questions for you: Is everything really gonna be alright? Why is pistachio ice cream so incredibly underrated?I really want to know: Where do 24 year old life coaches take their confidence from?

Hyenah - Love In Times Of CrisisReleased 1st July on RISE 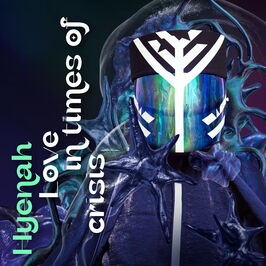