Intuitive. I work very much based on feelings and not so much rationality and logic (even though I’m German haha).

I’ve always been a “walking radio”, never not singing or making whatever kind of sounds I could with my mouth (eg. atrocious beatboxing). When I was about 13/14 I discovered Garageband on my laptop and started messing around with it. I had already been writing songs at the piano for a couple years at that point. My key inspiration behind that was really just beings o engrossed in other artists’ music, that I wanted to teach myself how to be like them:creating (sonic) worlds for people to lose themselves in. The artists inspiring me ranged from Sade to The XX to trentemøller to Prince. Too many to list here.

I’m too young to ever have experienced real analog music-making, and never really had the means to invest in analog music gear, when there were digital Plug-Ins for a fraction of the price out there. So, due to circumstance and practicality, I would say digital. But now that I’ve gotten to play around more and more with analog synths and FX, I’ve definitely developed an appreciation for that too. I think the combination of both is where the magic happens.

I don’t think I’ve played at enough places to really give you a varied answer, but what I will say is that theWatergate in my hometown Berlin have been supporters, and at this point family, from the very beginning. I played one of my first ever gigs there, a Covid-stream in early 2021.I’ve released a special EP on their label. I also met Damian (Lazarus) there when we played his Rebel Rave - Berlin Edition together and look where we are now. So many special memories on the Watergate floors and such a significant place for me.

The one thing I would love to be able to do is teleport. I think when you’re on the road so much, all the traveling, waiting around etc. can be so tiring and time-consuming. Playing the shows makes it all worth it at the end of the day, but if there was a way to avoid it, I would be first in line. I think every traveling musician would agree.
Q: 1 person you'd dream to have a coffee with?

Kate Bush. I recently read her biography and there’s so many questions I would love to ask her. Like, what was it like always thinking outside of the box in a time, when your fate was still in hands of (often) narrow-minded, conforming industry professionals. How did she find her own tone/voice when at the beginning, she kept being told that singing just wasn’t for her? How did being a woman through all of this impact her?

I have to admit, I’m not into movies too much. I’ve alway sloved making my own worlds in my head more than being presented a perfectly planned out world by someone else. Also, thanks to TikTok and co. I feel like I have the attention span of a hamster for long-form visual content. What I will say is that I grew up on StudioGhibli and old German puppet theatre films like Jim Button and I think because I havesuch a strong connection to those characters and storylines, it would be a reallyemotional and nostalgic trip for me to score them. So maybe those.

In(East-)Berlin there is this former railway roundhouse that was deactivated in the 90s and left alone ever since. It’s this huge building with a beautiful dome and old tracks running through it, right in the middle of nowhere, but still kind of close to the city center.Nowadays the walls are full of graffiti and colorful art. It’s called the RundlokschuppenRummelsburg officially. And it probably wouldn’t be the first rave thrown in there, judgingby the amount of beer bottles adorning the ground inside.

Damian Lazarus + MK remixes of my baby “We Will ForgiveOurselves” dropping this Friday, May 20th. Super hyped for that. I’m so in love with both remixes, and obviously it is such an honour to be remixed by these two legends... Then, the next big thing is my second album, which I spent January/February this year making in Ibiza. It was such a creative journey and exploration of the sound I want to stand for, that I couldn’t be more excited to finally share it with the world. It means so much. That will be released towards the end of the year, with Album singles coming much earlier though... So keep an eye out for that ;-) 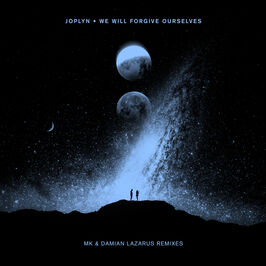