Luke: My mother used to work at Island records, I attempted to do my first tune on a Korg M1 around 1989

Gai: It was so many years ago, it’s just like a physical need for me, I think it’s Pink Floyd’s fault… I listened to something from them and suddenly fell in love with it.

Luke: Both have different things going for them and nowadays it’s harder and harder to tell the difference. But just out of nostalgia I love Analog.

Gai: Anything that helps me to make better music

Luke: In London I’d go for Printworks, it’s just been executed perfectly, sound, staff, layout, everything. My other fave club would be Warung because you just can’t beat the feeling of playing in the middle of a rainforest.

Gai: Fabric, London. The first time I played there I felt like it was home.

Luke: Not playing the same music as everyone else and being able to curate that music perfectly.

Gai: Music selection, credibility, and being authentic and yourself; always

Luke: Time Travel, for so many reasons. I could go back & right all my wrongs.Gai: The Power to fix this broken world, quite self explanatory.
Q: 1 person you'd dream to have a coffee with?

Luke: Gai Barone, but maybe a beer not coffee. We haven’t actually met in person yet but that all changes when we play together for the first time at club NL for ADE festival in Amsterdam later this year (October 2022).

Luke: I would love to have done Bladerunner although the soundtrack is pretty much perfect. It’s my favourite film so to be able to put music to those aesthetics would be amazing.

Gai: It’s an Italian movie, Nuovo Cinema Paradiso, the soundtrack is by Ennio Morricone, I think I’ve never found a more perfect match between a script and it’s soundtrack, every shade of the film is perfectly covered and supported by the incredible touch of the Maestro.

Luke: Buckingham Palace. Have a right royal knees up.

Gai: I’ve been in Sicily recently and I would recommend pretty much anywhere right here, people are so amazing and the countryside and the seaside are incredible.

Gai: Working on 7 different remixes atm, and an incredible album together with Luke and Kiki Cave, along with some brand new singles, an original soundtrack for a movie and well…. Lots more!

Luke: I was a pro Skateboarder

Gai: The best tracks I ever made, are full of unpredictable mistakes.

Luke: What colour underpants you wearing?

Gai: Where would you like to see us playing together?? 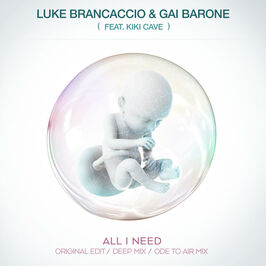